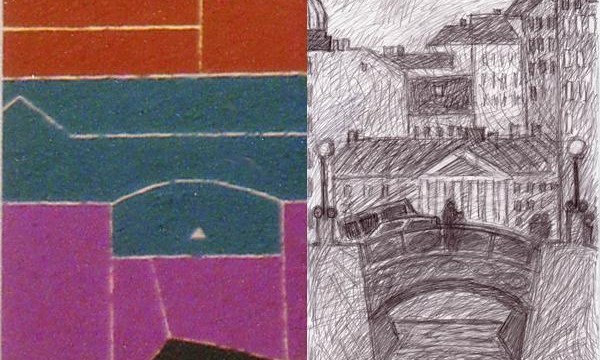 THE ART OF FEDOR ALEXEEV

Fedor Alexeev’s art could be defined as “post-avant-garde”, which somehow reflects current trends in this field. His attitude has absorbed many styles, notably abstractionism of Kandinski and Malevich in the aspects of dealing with principles of space, time and composition in painting and demanding special activity from the viewer.

The beauty of Saint Petersburg scenery is the main source of inspiration for the artist, but the final result is a far cry from any existing academic representation in the city iconography, yet is strongly connected with the tradition. Speaking in terms of literature, the city Fedor depicts is the one of Josef Brodsky as much as of Dostoevsky.

Alexeev is searching for the definition of color using pure straight colorings, making parts of the picture look as simple plain surfaces of geometric forms, rather than of detailed objects, though still identifiable as a cityscape. Through consistency of deep color layers one can feel the energy of the inner life “inside” the painting that merges the color and form in vibrant harmony.

The process of making this kind of painting is rather complicated. It begins with sketches done on location, each contributing to one another and eventually ending up in distinct forms, the unimportant and three-dimensional details removed. After the shade and color decisions are made, the rest of the work is pure oil on canvas. The mechanism of this transition is transcendent, done with keeping in mind the idea of colors following their own rules, when each added color interacts with the previous one. In artist`s own words, he is doing his best to let colors have self-expression. Even a smallest change of brightness can drastically change the color embodiment. The main goal is to find a synthesis of colors and shapes that would give each color a certain extent of independence, at the same time creating an interaction that would please the eye of a viewer. In that aspect (although unintentionally) this gives the painting interior art qualities of the highest order.

As a result of this long road (sometimes taking several years to make one item) the final canvas comes out really grand, artful in its forms and color presentation, and serious in its essence, as opposed to the general playfulness of contemporary art.